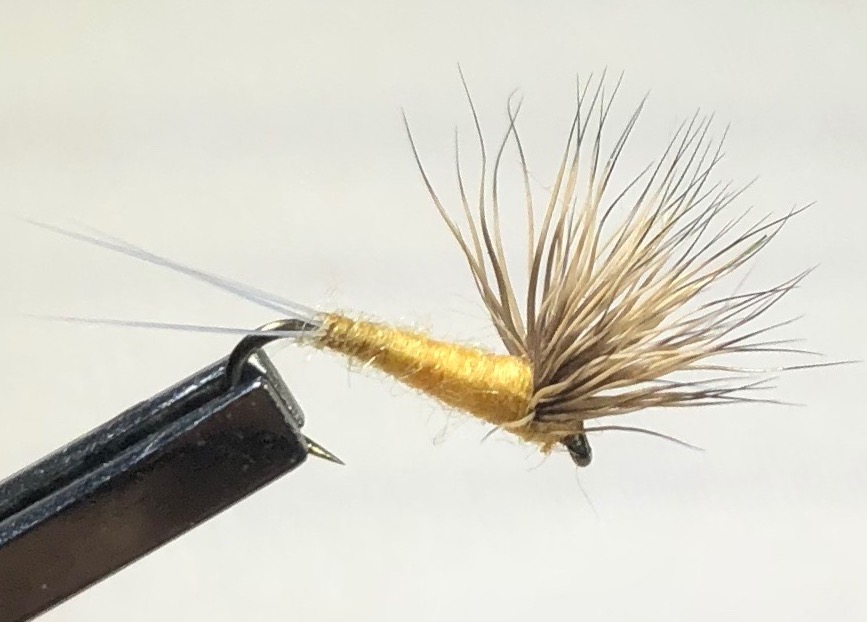 In the Smokies, we are mainly fishing faster, choppier water and often choose bushier, more heavily hackled dry fly patterns that float well.  In that kind of water, trout don’t get much time to study the fly and their view tends to be distorted by those choppy currents, so the bushier flies tend to do the trick.  Even when fishing pools in the Smokies, you usually have a defined feeding channel that will have at least a little chop to it.  In those situations, a parachute style fly pattern is usally adequate to provide a slightly more realistic profile.

But in flatter water like you commonly see on tailwaters like the Clinch, particularly weeks into a heavy hatch, an even more realistic profile is necessary.  Trout routinely refuse parachute style flies and probably wouldn’t even consider a vertically hackled Catskill style dry fly.

This problem isn’t new to fly fishers.  In the 1930’s, Fran Betters developed the Haystack to fool trout in slow moving spring creeks.  It consisted of a deer hair wing and tail and no hackle, allowing for a lower riding fly with a much more realistic profile.  Al Caucci and Ed Natasi introduced the Comparadun, a variation of the Haystack, in their 1972 book, Comparahatch.  The pattern is essentially the same but they were able to use more modern microfibbets to create a longer, slimmer, more durable split tail that aided in floatation.

In the mid 1980’s, Craig Matthews and John Juracek took the Comparadun a step further and replaced the split microfibbet tails with a piece of antron or zelon.  It essentially turned the fly into an emerger, with the antron or zelon “tail” suggesting the trailing shuck of an emerging mayfly.  Of course, in any of the patterns described above, the body, wing, and tail/shuck colors can be altered to imitate different insects.

I routinely fish the split tail and the trailing shuck versions, usually during a sulphur or BWO hatch.  And again, I am usually fishing them on the Clinch or possibly in a slow pool in the mountains.  They just don’t float well enough to fish them in faster riffles and pocket water. But on a slow glide on the Clinch, they can be deadly!