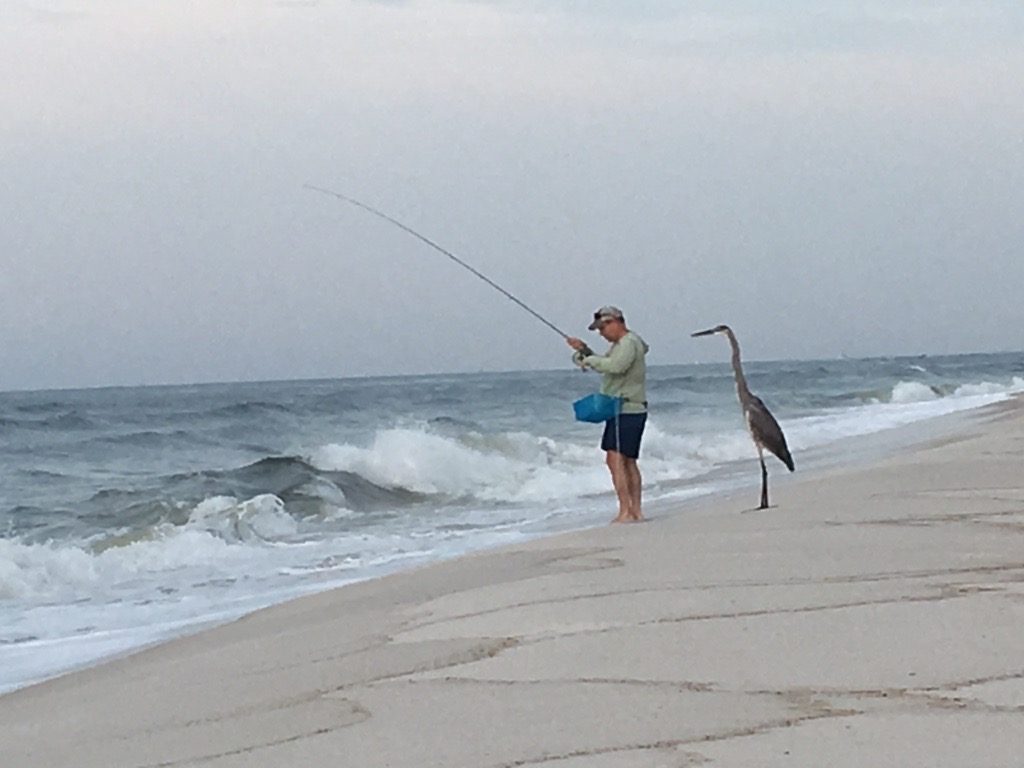 Every time I go to the beach on vacation, I take a fly rod with me. Sometimes I already have plans to do some flats fishing with a guide but just as often, my only plan is to get up early each morning and cast around in the surf to see what might bite. That’s one of the neat things about fishing in the ocean. You never know just what you might find!

I’ve been doing this for years. Some years it’s really productive and other years not so much. It is fishing after all. The one thing that is a constant is the strange looks I get from other people on the beach – strange looks that often lead to questions. And they are typically not questions aimed at gaining knowledge, rather to find out exactly what kind of idiot I am.

On this last trip I was approached by a kid who asked, “Did you catch anything?”

“Wait, really? You actually caught fish? On a fly rod?”

I gathered that part of his dismay was because he’d been fishing the beach himself with no luck. But he was most especially shocked that I’d been catching them on a fly. Despite the fairly well publicized evolution of fly fishing, much of the world still makes the assumption that fly fishing is something that is done in streams for trout. Nothing more.

If you are under that same assumption, let me assure you that you can catch anything that swims on a fly rod. Your only real limitation is depth. In other words, deep-sea fishing with a fly rod, while it can be done, is hardly a practical undertaking. However, fishing the saltwater flats with a fly rod is not only productive and fun, but has been a popular pursuit for decades. Fly fishing the surf sort of falls into that middle ground of practicality. It’s definitely a challenge, but with the right technique, can be very productive. And if you’re going to the beach anyway…

If you’ve ever considered surf fishing with a fly rod, you’re going to need a few things. Unless you just know of specific fish feeding in the surf that require heavier tackle, a rod outfit in the 8-10 weight range should take care of most situations.  Unlike freshwater set-ups, your reel is probably the most important component of your saltwater outfit. Not only do you want something more resistant to corrosion, but something with a significant drag system. Even the smallest of saltwater fish can run hard and fast, and a cheap reel will at best result in a lot of lost fish. Really cheap reels with plastic parts may even “melt” on you!

Leaders should be in the 9’ range and at least a 10lb. test. Most of the time when fishing the surf, you’re casting larger flies in water that doesn’t have a lot of clarity, so fine tippets are not needed. In fact, many saltwater species are rather “toothy” and can cut through traditional monofilament. You may want to consider adding metal bite guards or using wire leaders and/or tippet.

For fly selection, I typically keep it simple and use multi-purpose baitfish patterns. Clouser Minnows and Lefty’s Deceivers in a variety of colors will take care of most situations. It never hurts to have a few crab patterns as well. If the area you’re fishing has a specific fly fishing shop nearby (most don’t), you can probably get some good fly recommendations there.

One of the most important things you’ll need is a stripping basket. I learned this the hard way on my first surf fishing experience. Most of the flies you’ll be fishing will be some sort of streamer, which means you’ll be stripping a lot of line. Unlike stream fishing, the line you strip will not rest neatly by your side when you strip it. Rather, the surf takes that slack line quickly in toward the shore, then out toward the sea, repeatedly. Not only will this cause big problems when you hook up, but the line routinely just wraps around your legs.

Stripping baskets can be purchased from most fly fishing suppliers or you can make your own. See the companion article “Stripping Baskets” in this newsletter to learn how. It’s cheap and easy!

Now that you have all of the right stuff, it’s time to talk tactics. Effectively fishing the surf is going to require as much observation as anything. If you just stand on the beach and repeatedly cast to the ocean, you’re going to end up with gobs of slack line when the tide rushes it back to you, you’ll wear yourself out, and you likely won’t catch many fish. Watch the water first.

The first thing to look for is feeding fish. If you can find schools of baitfish breaking the water, there’s something bigger chasing them. If you find a lot of this going on, you should have a really good day! Also watch for birds gathering over a certain piece of water. They’re looking for the same thing you are and they have a much better view. Typically, when you find the birds you find the fish.

Whether you can visibly see fish feeding or you’re simply casting blind, you want to time your casts. If you’re randomly casting into breaking waves, you’re probably not putting the fly in front of the fish and even if you do, you likely won’t be able to detect a strike due to excess slack created by the breaking wave. Fish will normally feed in the calm water just behind the breaking wave. In rough surf, these can be very short windows. In calm surf, they can be long windows.

In either case, waves tend to break in consistent patterns. Watch them. The waves may break in threes with calm water behind them. Or they may break may break in fives with calm water behind them. Take the time to learn the pattern. When you have it figured out you can time your casts accordingly to place and strip the fly behind the final wave in each series. And working at an angle, casting and stripping almost parallel to the breaking wave, will keep your fly in the prime target area for the most amount of time.

The best time to fish the surf will certainly be when the surf is most calm. However, unless you’re at a private or sparsely populated beach, you’re best time is going to be from sunrise until 8 or 9am. That’s about the time when folks begin walking the beach looking for seashells and what not, and I can assure you that they will pay no attention to you. Since that fly line goes about as far behind you as in front of you, the chances of putting a Clouser Minnow into the lip of a passing beachcomber are high! Of course, when you get into late morning and afternoon, you add swimmers to the list of obstacles.

But that makes it perfect when you’re on a family vacation. Get up early and fish a couple of hours, then spend the rest of the day with your spouse or kids. Give it a try on your next beach trip and don’t give up if you strike out the first time. Like most other types of fly fishing, you have to suffer through some failure before things start to click. But when it clicks, it is all kinds of fun! Oh, and don’t forget that saltwater can really trash your gear, even the good stuff. Be sure to thoroughly rinse all of your gear after each outing.