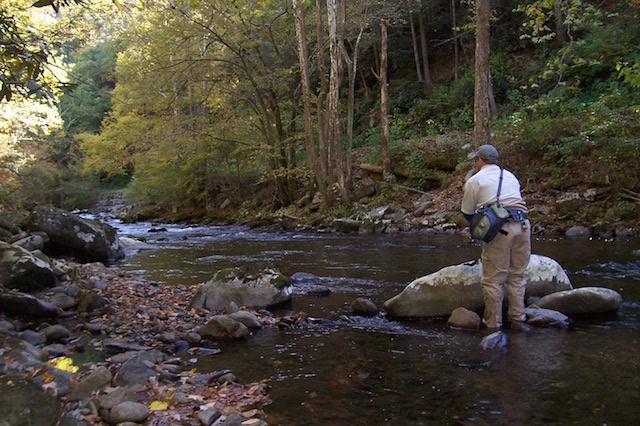 Last month, I talked about ways to simplify your fly selection and offered tips on how to choose flies based on season and what was hatching. Based on the number of questions I had, however, I left out an important part of the process. Many folks said they are often uncertain when to fish a dry fly vs. a nymph.

As you might imagine, there are a lot of variables and there is not a simple answer like fish nymphs before noon and dries after. The truth is, in places like the Smoky Mountains, when conditions like water temperature and water level are ideal, it often doesn’t matter. There have been plenty of days when I’ve fished with my buddy Brian, going up the stream together and taking turns fishing. He was fishing nymphs or wet flies and I was fishing dries, and we caught about the same number of fish. When conditions are right and the trout are actively feeding, they’ll typically feed on both.

So when the conditions are great and you could fish either, how do you decide? Sometimes it just boils down to personal preference. I happen to think fishing with dry flies is more fun, so I’m often going to choose a dry fly in those instances. But it also depends where I’m fishing. If it’s purely a rainbow or brook trout stream, I’m highly likely to fish dries. But brown trout are more reluctant to feed on the surface, so if there’s a chance of catching a bigger brown, I’m more likely to fish nymphs.

Some people choose to fish dry flies because they think it’s easier. Nymphing requires you to read the water three dimensionally, meaning you have to factor in the depth as well as the surface currents. And there is more stuff, like split shot and sometimes strike indicators, that can lead to more tangles for less experienced anglers. On the other hand, one of the most experienced fly fishermen I know chooses to fish nymphs in smaller, pocket water streams for a similar reason. He says he can cover more water and catch more fish because he’s not spending so much time drying and redressing his dry fly after every fish. It’s a great point. Keeping a dry fly floating in smaller mountain streams, especially when you’re catching a lot of fish, can require a lot of time and effort.

So when the conditions are great and you could fish either, it’s really just going to come down to your personal preference and fishing style. But what about when conditions are not ideal? What are some “less than ideal” conditions that might dictate the use of one fly category over another?

The first one that jumps to mind is water temperature. If you’re fishing early or late in the year when the water temperature is in the 40’s (or colder), there will be fewer insects hatching and the fish are going be more lethargic and less willing to come to the surface to feed. While you can sometimes coax fish to the surface in these conditions, you’ll likely have far greater success fishing nymphs near the bottom where the fish is already seeing most of its natural food and where it doesn’t have to expend as much energy.

High water is another one. When water is high, many of the channels are moving too fast at the surface. In pocket water, the water that normally goes around the rocks is going over them and eliminating the holding pocket. Fish will not only have a tougher time seeing food on the surface, they will have to work too hard to get it. While there can sometimes be fish surface feeding in back eddies, etc. in high water, you’ll likely be far more successful drifting nymphs closer to the bottom.

Low water can be the opposite. Fish don’t quit feeding on nymphs when the water gets too low, but it gets very difficult to fish with nymphs in these conditions because you’re frequently hanging the bottom. Can it be done? Absolutely. But you’ll have a much easier time fishing dry flies in these conditions.

The other situation worth mentioning is fishing for trout in tailwaters. While there are exceptions, most tailwaters are not known for their diversity in aquatic insects. Rather they’ll usually get one good mayfly hatch and/or one good caddis hatch and that’s it. The Clinch River is a perfect example. It gets a great sulfur (mayfly) hatch in May and June and that’s it. During that timeframe, the dry fly fishing can be pretty darn good. The rest of the year their diet mostly consists of midge larvae, scuds, and sulfur nymphs.

Even when tailwater trout can be observed surface feeding on adult midges, you can usually catch fifteen trout below the surface for every one you can catch on top. Tailwaters almost always lend themselves better to nymph fishing.

Finally, if you want to get scientific about the whole thing, it is estimated that anywhere from 65-90% of a trout’s diet comes from below the surface. And it makes sense, particularly when you consider that the typical aquatic insect spends one to four years as a nymph and one day to two weeks as an adult. So really, we fish dry flies because it’s fun and sometimes easier. If your primary goal is catching big fish and/or more fish, learn how to fish nymphs.