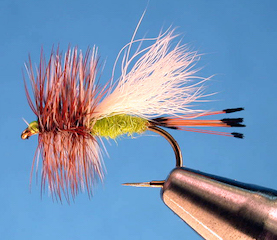 Summer is creeping slowly into the Smokies and fly patterns are beginning to shift again. In late spring and summer, nearly everything that hatches is brighter in color. Most of the aquatic insects you see are some shade of yellow or bright green, so it certainly makes sense to fish fly patterns in the same color profile.

As I’ve mentioned numerous times, fly patterns are hardly the most important piece of the puzzle when trout fishing in the Smokies. Approach and presentation is the name of the game here. The wrong fly presented well will always catch more fish than the right fly dragging across the surface. But if your presentation is solid, it stands to reason that showing the trout a fly that looks a little more like the naturals they are seeing will produce far more strikes.

Since hatches in the Smokies are rarely heavy enough to make the trout key in on specific insects, color and size are really the most important components of fly selection. And since we tend to fish a lot of riffles and pocket water in the summer months, buoyancy and visibility can be extremely beneficial as well. While there are a number of fly patterns that meet all of those needs, one of my favorites is the Lime Trude.

The Lime Trude is just one of many variations of what was originally a wet fly designed by Carter Harrison. In the early 1900’s, on a trip to the A.S. Trude Ranch near Big Springs, ID, the fly was apparently created as a joke, using red yarn from a cabin rug as the body and reddish dog hair for a wing. The fly was an instant success and eventually got “dressed up” with more common fly tying materials, including a tail and hackle, converting it to more of a dry fly dressing.

The fly became a staple in the Rocky Mountains and evolved, as most patterns do, with the increased availability of more diverse fly tying materials. It seems a number of great fly tiers, including Dan Bailey, had a hand in the evolution of the fly we know today. While there are a number of variations still available, the Royal Trude is probably the best known. Essentially, it is just a hair wing version of the classic Royal Coachman. The Lime Trude, which gained notoriety after winning the Jackson Hole One-Fly Contest (I believe in the late 80’s or early 90’s), is probably a close second in popularity.

Much of the fly fishing history in the Smoky Mountains was not recorded so it is difficult to say just when the fly first made an appearance on our streams. But it has certainly been catching trout for many decades. For the purposes mentioned above, it has everything you need. The bright, greenish-yellow body looks like a lot of what the trout see this time of year. The hackle and calf wing make it a fairly buoyant fly. And the white hair wing also makes it highly visible.

It is certainly an attractor fly that might pass for a variety of caddisflies, stoneflies, and even mayflies. Fish it in sizes #16 – #12 on your favorite Smoky Mountain stream and let me know what you think!